A First Among Poets 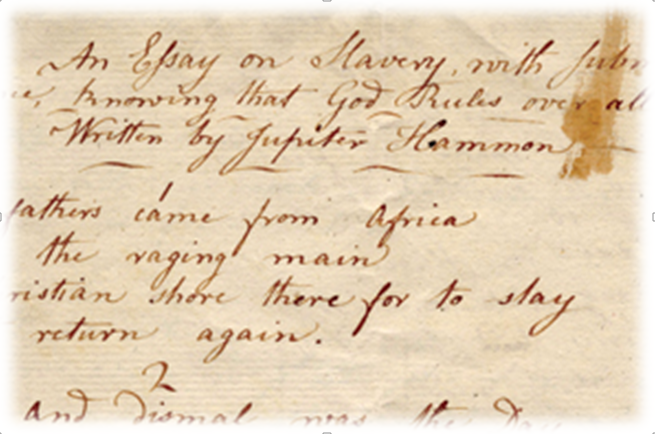 To say someone was one of the first to do something is a pretty big deal. To say someone was the first American of African descent to do something in our country is a really big deal. Many times those who are the first in this way are said to break a color barrier as African Americans were required to play by different rules, subject to different laws and under extreme prejudice and injustice for centuries on this continent. In preparing this brief biographical sketch on a man from the earliest days of America I was saddened that I knew more about Jackie Robinson than Jupiter Hammon. If you know not either Jackie or Jupiter, I’m happy you are taking the time to hear of Mr. Hammon first.

Jupiter Hammon lived his life as the owned property of other human beings. He lived through the era of imperial rule in the Americas, through the revolutionary days into the earliest dawn of the United States. He lived not far from us here in New Jersey growing up and living most of his life on Long Island, NY. He lived his entire life as a slave in the service of the Lloyd family. The Lloyds were a wealthy household and Hammon served as a tutor to children as well as a business clerk and bookkeeper. 1 Hammon was educated by Harvard graduate Nehemiah Bull and a missionary named Daniel Denton. 2 Though a slave in the temporal and natural sense of the word he was, however, possessed by another master as he saw his life ultimately belonging to Jesus Christ. His dedication to the Lord was demonstrated by his taking on extra work simply to earn money to purchase his own Bible. It was this book that occupied so much of his thought, heart and devotion and it is reflected throughout his work.3 The Lord he loved inspired him to write poetry. His work was so compelling that he became one of the first published African American authors in North America in 1769.4

Hammon’s best known works are An Evening Thought: Salvation by Christ, with Penitential Cries 5 and his Address to the Negroes in the State of New York.6 The former was the poem which was his first published work in 1769. The latter as it was his most enduring and wide read address. An Evening Thought is a clear and resounding work of gospel clarity and devotion. Hammon was a convert to Jesus through the spiritual awakenings in the colonies in the 1730s and 1740s.7 In a day when black people were seen by many as inferior to their European masters, Hammon’s thoughts drew his readers up to our common creator, judge and savior Jesus Christ. Hammon wrote in such a way that people were apparently doubtful that his work was the product of a slave. Even his printers included a disclaimer which was published as a header to his most famous work “An address to the Negroes in the State of New York.” The disclaimer read as follows in the original.

As this address is wrote in a better style than could be expected from a slave, so maybe ready to doubt the genuineness of the production. The author, as he informs in the title page, is a servant of Mr. Lloyd, and has been remarkable for his Fidelity and abstinence from those vices, which he warns his brother in against. The manuscript wrote in his own hand, is in our possession. We have made no material alterations in it, except in the spelling, which we found needed considerable correction. 8

Hammon’s views of slavery may sound strange for some of us to understand. In his address to his fellow African Americans in New York, he shared that his desire was to remain as a servant to his masters. He expressed he had no desire to be free though he encouraged others towards freedom if they could gain it honestly.9 This however must be coupled with a few observations. First, Hammon apparently had a good relationship and situation with the Lloyd family of Long Island. It seemed they both viewed and treated him as a trusted part of their household and family. Furthermore, he seemed to have held two truths in tension. First, how slaves should relate to their earthly masters and second, whether or not people were morally right in taking others as slaves. He viewed the latter as morally evil while encouraging those who were slaves to show honor and obedience to their masters. For example, in his “Address to the Negroes” we read the following doubt of the institution’s morality, while affirming the honoring of masters. He wrote:

“Now whether it is right, and lawful in the sight of God, for them to make slaves of us or not, I am certain that while we are slaves it is our duty to obey our masters, in all their lawful commands, and mind them unless we are bid to do what we know to be sin, or forbidden in God’s word.” 10

Finally, a more recently discovered manuscript makes it resoundingly clear that Hammon viewed slavery as “a manmade evil.” 11 Many of his works were also published by the Quakers a group firmly on the side of the full abolition of the institute of slavery in America.

In reading Hammon’s work I learned a few things and was impacted in several ways. First, Hammon was a realist about the fallenness of this word astutely observing that “I have had more experience in the world than most of you, and I have seen a great deal of the vanity, and wickedness of it.”12 Second, even though he existed under a system of utter injustice and slavery he did not see that as a reason to sin and disobey God. It seems he understood the Lord Jesus who taught us to love our neighbors and even our enemies. He even gave fellow slaves counsel on how following the Lord, doing right and honoring others, and not stealing would be of more benefit to them than sinning against a harsh master. He condemned theft and being unfaithful to others in the strongest of terms.13 Third, he put the honor of God and God’s name above all. His exhortation against swearing or taking God’s name in vain was unambiguous. He even dissuaded those who would use the example of swearing white masters as an excuse for their language. He reminded them that there is a higher authority always with each of us: “God is greater than all other beings, and him we are bound to obey. To him we will give an account for every idle word we speak.”14 Finally, though he desired freedom for the coming generation of black people in America, he continued to point to the great reality of spiritual and eternal freedom as the greatest concern. I think he just dropped the mic after this one: “We cannot be happy if we are ever to so free, or ever so rich, while we are servants of sin and slaves to Satan.”15

It is clear from reading Hammon’s poetry and addresses that he was first and foremost concerned with the Kingdom of God and people coming to a saving knowledge of Jesus Christ. He even encouraged freed blacks in his day to use their new freedom for the study of the Bible and to promote of the Gospel of Jesus Christ. To the freedmen he said plainly “You have more time to read God’s holy word, and to take care of the salvation of your souls. Let me beg of you to spend your time in this way, or it will be better for you, if you had always been slaves.” Whether this was said as hyperbole or simply from a strong set of eternal values, Hammon saw the preeminence of Christ and his Kingdom. This comes through pointedly in his first published poem which begins with these words:

SALVATION comes by Jesus Christ alone,
The only Son of God;
Redemption now to every one,
That love his holy Word.
Dear Jesus we would fly to Thee,
And leave off every Sin,
Thy tender Mercy well agree;
Salvation from our King.
Salvation comes now from the Lord,
Our victorious King;
His holy Name be well ador'd,
Salvation surely bring.
Dear Jesus give thy Spirit now,
Thy Grace to every Nation,
That han't the Lord to whom we bow,
The Author of Salvation.
Dear Jesus unto Thee we cry,
Give us thy Preparation;
Turn not away thy tender Eye;
We seek thy true Salvation.16

We do seek the same King today that he so strongly pointed his world to in America’s early days.

Lord, do Give us thy preparation,
Reid S. Monaghan

An Introduction to 1 Timothy

Our Flow is Gospel - An Introduction to 1 Thessalonians

Warchild - The Backstory of Baby Jesus

An Introduction to 1 Timothy

Our Flow is Gospel - An Introduction to 1 Thessalonians

Partial Victories and the Faithfulness of God

Great Prayers of the Old Testament