What Jesus Says to Hookers

Jesus Reputation, throughout his life, he openly received sinners

In the gospels we repeatedly see Jesus associate with, openly receive and hang out with people who sinful.  The outcast, the broken, the conman and the prostitute all were welcomed in his life.

this Brings Two Points of Conflict

Jesus association with sinners brought conflict and controversy to his life and ministry. First, his open association with them was controversial in his time particularly among religious people.  Jesus neither endorsed sin and their sinful lifestyle but some people thought his mere hanging out with them somehow compromised him. Second, Jesus was not content to leave people in sin.  He showed grace and kindness and brought people to turn from sin back to God (repentance). His forgiveness of sinful human beings brough radical transformation to people's lives and brought questions as to how he could forgive sins if he were a mere man.

We See a Full Picture of Jesus

Jesus is a unique person in all of human history.  The Scriptures teach us that he was both fully human and fully divine in one person.   In this story we see he is fully human – he is present, interactive, bold, kind and devastating.  Furthermore, he displays that he indeed is God having the right and ability to forgive human beings.

Mark 2:1-7 (ESV) 1And when he returned to Capernaum after some days, it was reported that he was at home. 2And many were gathered together, so that there was no more room, not even at the door. And he was preaching the word to them. 3And they came, bringing to him a paralytic carried by four men. 4And when they could not get near him because of the crowd, they removed the roof above him, and when they had made an opening, they let down the bed on which the paralytic lay. 5And when Jesus saw their faith, he said to the paralytic, “Son, your sins are forgiven.” 6Now some of the scribes were sitting there, questioning in their hearts, 7“Why does this man speak like that? He is blaspheming! Who can forgive sins but God alone?”

We see the clear connection with Grace and Life Change

Jesus told Simon the Pharisee, he who is forgiven much loves much...who who is forgiven little, loves little.  Jesus connects the ideas that God's kindness and forgiveness to those who understand they are sinners leads to deep gratitude and love. When we love God we see our desires and our lives change.  The following illustrates these connections: 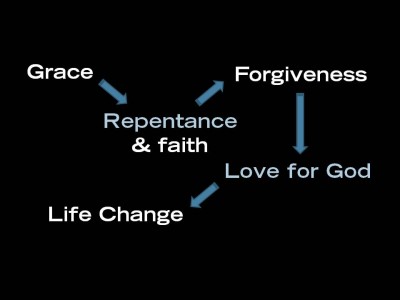 What Jesus Said to a Murderer

What Jesus Said to the Humble

What Jesus Says to the Powerful